Set up a VLAN

A VLAN acts like a private gigabit ethernet switch, connecting your servers together via a second virtual ethernet card in each server. This network is isolated from the internet and other customers. Data transfer over a VLAN is secure and not chargeable.

To set up a VLAN, first you’ll need to purchase it. If you want to use it for a set length of time, you can buy it as a subscription. If you’d rather pay for burst use, you’ll need to have some pre-pay credit in your account.

Now you can add the VLAN to your account in the control panel:

Step 3: Add VLAN to each server

For each server you want to connect to the VLAN, shut down the server, and click Edit. Then edit each server’s configuration to use your private VLAN (under Advanced). You’ll need to choose a network card at the same time: 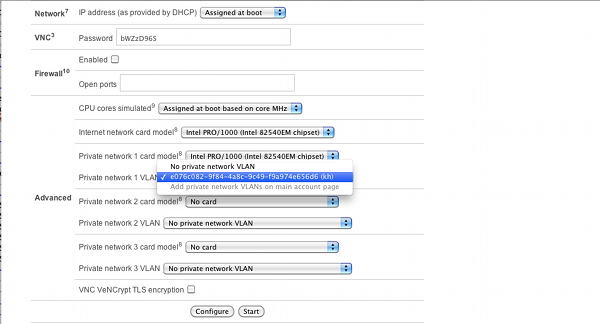 You can also create and manage VLANs through the Resource API.

Step 4: Configure servers to use VLAN

Finally, you’ll need to configure each server in the group to use the VLAN. On Debian-based Linux distributions (including Ubuntu and Mint), you can do this by logging in to the server, and then running:

From the output of ifconfig, you should see that eth1 exists. Next edit your interfaces file as follows:

The output of ifconfig should show that the 10.0.0.1 address has been set. (You can actually set it to anything you want, but the 10.0.0.* block is private, so it’s conventional to use that.) You can now connect a second server to the VLAN in exactly the same way – just substitute the IP address 10.0.0.2 for 10.0.0.1 in the interfaces file. Once you have connected both servers as above, from the second server, check that you can ping 10.0.0.1: